Over 40 years of history

Elvia PCB group was created at the Coutances facility, then a subsidiary of the ALCATEL group.

Bruno CASSIN, then CEO of the subsidiary, organised an MBO (management buy-out): Alcatel Coutances became Elvia PCB. This was the beginning of a period of solid growth helped by a succession of acquisitions.

Acquisition of Avi & Peschard (flex PCB specialist) and then of Lithos (French leader in the manufacture of microwave PCBs). 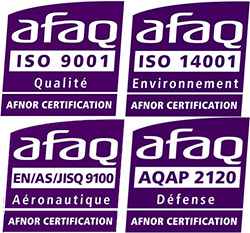 These 2 companies merged on the Chateaubourg site. The new entity was named A&P-LITHOS. Elvia PCB: after having been certified ISO 9001 and then ISO 14001, the company continued to distinguish itself by acquiring new certifications: EN9100 for Aerospace and Defence and AQAP 2120 (high quality management tool to meet specific requirements of ISO 9001 and the defence industry). The new group, which was in the process of consolidating its activities, continued its dynamic growth by acquiring Sagem's (SAFRAN Group) PCB activities and creating the eLci subsidiary. Under the initiative of its President, Bruno CASSIN, Elvia PCB Group rapidly positioned itself as the French leader in the PCB market and took its place in the European top 10 in the Air and Defence sectors, however the eLci facility was closed when a fire forced the company to change its strategy.

Elvia PCB developed an industrial rationalisation program and became the third company in the world to obtain PRI-NADCAP accreditation (aeronautics certification). The following year, the former subsidiary eLci converted to the solar industry and became SILLIA Energie. eLci employees were transferred to the new company and all jobs were preserved.

Elvia PCB consolidated its leading position by acquiring the CIRE Group, which is also specialised in the manufacture of PCBs. The company thus doubled its production capacity and integrated major new facilities such as PLANTIN, CIRETEC, BREE.

The company continued to accumulate distinctions by acquiring ISO TS 16949 (quality certification for the automotive industry) and ISO 50001 (certification of energy efficiency management).

Transformation and industrial modernisation plan for the facilities: investment in technology, factory 4.0, an industrial organisation based on 2 business units (Aerospace/Defence and Automotive/Industrial).